HONDURAS 2018: WE BROUGHT HOPE AND THEY GAVE US LOVE

La Mano of Hope > Journals > HONDURAS 2018: WE BROUGHT HOPE AND THEY GAVE US LOVE

Over 1250 patients in six days in five communities received treatment

CEDEÑO in the state of Choluteca

The heat was unbearable but the mission of help and hope by La MANO of HOPE formed by a group of doctors, nurses and assistants had to be completed, and so it was! The group of La MANO of HOPE volunteers, 7 from Hagerstown, Maryland, arrived to the airport in Tegucigalpa in Honduras and were then transported by school bus to the state of Choluteca to begin the medical clinic in the town of Cedeño.

The U.S. professionals came to bring medical services and present a soccer camp in conjunction with the non-profit organization Koinonia Children’s Ministries, directed by Jose Hernandez whose mission is to bring assistance to the children on the streets on Cedeño.

Cedeño is one of the southernmost towns in the country. In addition to medical attention, which ran from the early morning until mid-afternoon beginning Saturday April 14, 2018, the team also presented a soccer camp where some 80 children, youth and adults participated.

This La MANO of HOPE team comprised of Dr. Jill Ciccarelli, Chris Ciccarelli, Alex Cañas, Melissa Linn-Cañas, Dr. Gelnar Talj, Meagan Bromley, and Douglas Gomez began preparing the night before packing their medications and work equipment as well as the soccer balls, candy, gifts and many other items needed for completing the mission. Joining the U.S. delegation in Cedeño was another La MANO of HOPE volunteer, Julio Palacios, a Salvadorian who arrived from Guatemala, where he is currently living, to work for the week with the team. 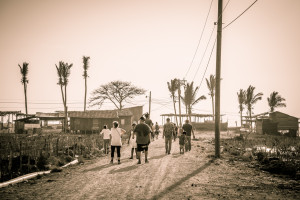 The medical clinic was well attended in Cedeño. The residents from the area arrived very early and waited to be seen in the clinic, enduring the temperatures rising to 90 degrees Fahrenheit, typical for Central American countries during the month of April, but specifically harsh in coastal areas such as Cedeño. Standing on the shore just a short walk from the clinic site, located in the Golf of Fonseca, you can look across the ocean and see the mountains of El Salvador and Nicaragua.

“You have brought us so much hope which has given us the motivation and inspiration to continue on in our work,” stated José Hernández, the director of the Children’s ministry, Koinonia, who expressed his gratitude to each of the participants for their work and compassion for those who many have seemingly forgotten.

Although it was only two days total in Cedeño, they were two days full of activity. From there the grupo travelled to the north central area of the country to present more medical clinics in the area of Masica, in the state of Atlantida.

San Juan Pueblo, one of the communities in the municipal of La Masica in the state of Atlantida in the northern part of the country received the team with beauty, friendship and love from the moment they arrived. It was in Masica that the complete La MANO of HOPE team converged as the final group of El Salvadorian volunteers joined to offer medical services to those with great need in this area of Honduras.

The U.S. delegation consisted of 8 U.S. volunteers and from El Salvador a delegation of 7 translators, all laboring diligently to make the outreach a success, in all serving over 1250 patients.

Additionally, there were 3 Honduran volunteers that rounded out the team, Dr. Marleny Lopez, Dr. Marlon Paz, and the youngest team member, 14-year-old Katherine Paiz, who served as a very skilled translator. These Honduras volunteers were very special guests to this team, without whose efforts in the local communities the team could not have accomplished all that they did for those in need.

Daily schedule began at 6 am and generally finished at 10 pm, with each day full of a lot of work attending patients, accompanied by a recreation activity and dinner in the local community, offering the team the opportunity to interact and build relationship with those from the area. It was impossible to not fall in love with each moment, journey, river, mountain and the beautiful people who made the entire team feel as if they were at home with family.

The base of operations in the northern part of the country was San Juan Pueblo, a place full of rich vegetation, gracious and inviting people and rivers and an area in La Masica where you can find ongoing community development.

A special thanks to the partnership of the mayor of La Masica, Gerardo Quijada and the deputy mayor, Marleny Lopez. Their cooperation and reception allowed the team to finish the week with tremendous success.

Of course, it goes without saying that in all, none of the work would have been possible without our primary contact in the region, Luis Urbina, a local Honduran, a humble man with a beautiful heart. Thanks to Luis, the team was able to enter the communities where there was the most need and demand for medical attention, areas where there lack of resource and assistance is great.

“We are very grateful for your help and extremely happy to have you here,” expressed mayor Gerardo Quijada, who, along with his entire team, daily attended to the needs of entire La MANO of HOPE delegation.

Marleny Lopez, deputy mayor, who worked alongside of the team as a medical provider as well, shared her, “thanks for the help you’ve given our people. It is absolutely beautiful what La MANO of HOPE does.”

At the end of the work week in La Masica, an unexpected presentation from the leaders of the municipality to all of the La MANO of HOPE team filled hearts with joy and sadness as well, as it was time to say goodbye.

“We are so grateful. We came to offer medical, emotional and spiritual care, which is our mission and yet here we are, the ones receiving so much love and acknowledgement,” expressed Melissa Linn-Cañas, director of La MANO of HOPE.

Among hugs, tears and gestures of friendship, the team said, “see you again soon” to the local friends who had so quickly become like family.

Honduras is a territory of over 69 thousand square miles with a population of approximately 8 million. In a large majority of the rural communities in this country, there is a great absence of adequate medical care where you will encounter many adults and senior citizens who have never in their lives had the opportunity to been seen by a medical provider. 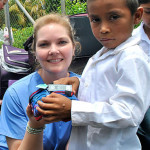 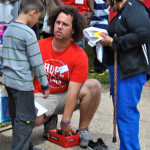